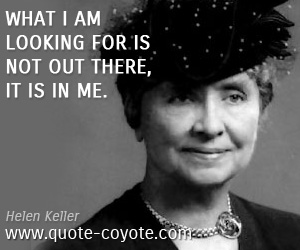 Do you find yourself comparing yourself to someone younger, thinner, richer, more educated, brave, accomplished, clever or kinder?

Do you find yourself thinking “well it’s ok for him/her/them?”

Do you feel fatter, poorer, lesser as a result?

Helen Keller could neither see nor hear, and yet she was one of the most remarkable people of recent times. What she overcame on a daily basis was utterly remarkable to those of us with sight, hearing and a voice to air our opinions with. She influenced world leaders and policy, inspired millions and lived through two world wars, literally starring in her own life in the process. Helen had many sides to a complex personality, but very little to compare herself with. Sure, there were other people who had no sight but shared a vision for a better world for people with disabilities, but Helen also was a suffragette, a union supporter, a writer, an actor, an activist, an educator and a lobbyist for a host of causes throughout her long and active life.

In short, Helen compared herself to nobody. There was nobody like her to compare herself with.

When we spent time comparing ourselves to others, we are ALWAYS going to find someone thinner, richer, wiser, younger, older, more or less successful. We are guaranteed to feel disappointed as a result of comparing ourselves to others, but also to feel perfectly justified in NOT trying something new or different, difficult or challenging because we are busy sitting in the pity barn!

If a woman like Helen Keller, could achieve an extraordinary life with such extraordinary challenges, then how could we take just a little bit of inspiration and try to do something out of the ordinary, with our extraordinary array of senses?

If we tell ourselves that we will wait until we are thinner and wiser, we are also going to be older and possibly fatter as a result. Waiting until we are ready is like Waiting for Godot in Beckett’s play. The longer we wait the more scared we become. The more conditions we want to have in place before we make a start, the more difficult it is to start anything at all.

What would happen if we stopped waiting and just started?

What would happen if we tried to make a change and hoped things would conspire to help rather than get in the way?

What would happen if we ended up inspiring others to take a chance and find their voice, just by doing the very thing we were scared to start all along?

So this week make a start. Stop waiting and see what happens and stop waiting….